New Hope Zoo Residents - Sampson and the Macaws
Investor  Moving Ahead at Hope Zoo
Renovations at Hope Zoo
Hope Zoo November 2010
How Not To  hug a Crocodile
An afternoon visit to the Hope Zoo on August 20, 2011 was a good time as we were able to catch up with curator Orlando Robinson and a zookeeper after they made a Cuban Boa's enclosure more comfy. 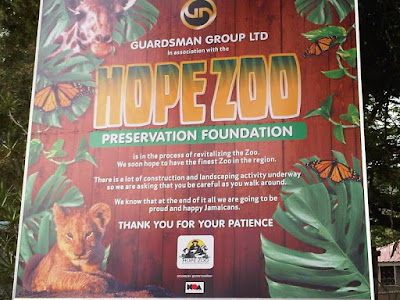 A few moments with Orlando gave us some insights on the news residents and what we can expect will be happening at the zoo in the very near future.

The Guardsman Group and Hope Zoo Preservation declare proudly that they are working to make our zoo the finest in the region. Certainly, they probably have the finest beauty spot for a zoo in the region as their ongoing inspiration. There was also a sign installation team erecting boards that promote the ongoing refurbishing, and that give visitors early guidelines on what is expected of them.


On this visit, the call of macaws announces that the Cuban iguanas have been relocated and their enclosures are now occupied by one dozen red and blue macaws and another yellow and blue macaws. The other birds in residence of course include cockatiels, lovebirds, the Jamaican yellow billed parrot, an ostrich pair, birds of prey among others species. We look forward to see the coming flamingo attraction and see if it will be compared with the famous Ardastra Gardens flamingos on New Providence Is, The Bahamas.
Visiting Hope is now even more relaxing as several picnic style benches and tables have been installed on the outskirts of lawns, where children naturally run freely.

What we wanted to know from Orlando first was why the area outside the snake house had been squared off with pegs and cord. He said that the house was going to be expanded and have more and larger snakes, even an anaconda. The one-eyed juvenile American crocodile that was housed there has become too large and been moved out but not on exhibit. His home is now occupied by smaller residents.
Of the big enclosures being constructed, he said that one will house spider monkeys. There is one new monkey in the zoo, the playful Sampson who was confiscated because it was brought into the island illegally. He is very active inside of a large enclosure. You can see him through the hard plastic window.
The two big cat enclosures are being joined to create a larger lion enclosure. Visitors will be able to see the lions from behind glass. This will hopefully put less stress on the animals.
Orlando confirmed that the ostrich pair have finished moulting, and the new feathers have started to appear.


The pegged out areas in front of the snake house, the manager says, is where the new enclosures will be put to expand that reptilian area, and a boa constrictor will be one of the residents.
All but one of the apartments in the birds of prey section is occupied, only the American Kestrel (Killy Killy) is left to join the owls, hawk and eagle, Orlando said.
The Hope Zoo is a breeding station of the Jamaican Iguana which was thought to be extinct for decades. It is good to see that the sign on the breeding site is now clearly visible saying that it was developed with the assistance of several zoos in the United States of America. Long may that association continue. The zoo may, at some time in the future, wish to remember the work of Dr Peter Vogel in allowing this endemic creature a sustainable comeback.
Update: October 15.
The zoo put Sampson down as he was tested positive for a disease.
Posted by Gwyneth Harold Davidson at 19:07

After watching their airplane disappear, Christopher Khouri and Avis Moore realise that they are trapped on Great Goat Island, but even more determined to stop atmospheric engineer, Reginald Bowers, from blocking satellite communication in Jamaica

“The plane is there. It is an illusion,” Christopher said looking at the space on the runway where the plane sat a few moments before. If we take down Reggie’s radio tower it should destroy the receiver and lock off the force he is using.”


“Listen,” Avis said. Barking dogs were in the distance. “We need to move fast.”
Christopher led the way to a dune and they climbed it to get a further view. The sand was warm, not yet scorched by the mid morning sun. At the summit, they could follow the steel guy wires holding the slender 500 foot tower under tension. The stay for each guy was shrouded by the thick vegetation. Christopher selected the guy that was nearest to them and he and Avis slid down the dune. Not stopping to knock sand properly out of their shoes, they found a clearing where a large concrete block was the stay holding the guy in place.
“We have to shoot out this guy. If it goes, it will break the tension and the antenna will fall,” he said.
Avis took her sidearm from her waist. “This is a 9mm but I only have six in the clip.”
“Hollow point?”
“I’m not a butcher Khouri! My sidearm is to stop an assailant, not carve him up.” she said.
With both hands on the grip, she placed the muzzle on the steel, gently squeezed the trigger and fired. The bullet barely notched the cable and the dogs in the distance became more agitated.
Reginald’s voice came to them again. Christopher saw the small camera and the speaker mounted in one of the stouter mangrove branches. “Leave that alone!”
The second shot hit the cable in the centre, slightly denting it.
“Aim for the edge; chip it off,” Christopher said.
The dogs were closer. Their barks were punctuated by the third, fourth and fifth bullets that left a slender strand of cable remaining. Christopher landed a strong kick on it. It snapped and somewhere in the distance, a few seconds later, the antenna, no longer supported by tension, collapsed softly on the tops of the thick vegetation.
“The sea,” he said, and they ran towards a glimmer of water. Breaking out of the undergrowth on to a slim beach, Avis squealed as sharp teeth sank into her left calf. Christopher grabbed a handful of sand and threw it in the guard dog’s face and repeated it for another canine near to him. Disarranged, the pack stopped as the affected dogs heaved and coughed. The pair kept moving. Christopher leaped into the water first and swallowed brine as his feet never touched bottom. The shore had a sharp fall off into deep water. He broke the surface, gasped and treaded water, relieved to see that Avis was doing the same.
By Gwyneth Harold

Posted by Gwyneth Harold Davidson at 09:09 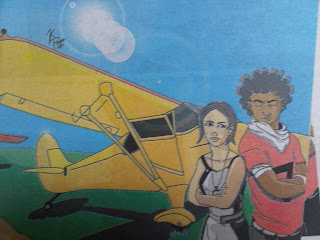 Christopher Khouri completed another fly pass over Great Goat Island without finding anywhere to land. Beneath him, an azure Old Harbour Bay moved in its own underground currents through to the Caribbean Sea. His passenger, Detective Avis Moore, a childhood friend insisted they go lower.
“Make another turn,” she said, although, the only breaks in the green were glints of swamp water.
Christopher checked the dials; they were already at 500 ft, much lower than regulations allowed for landing surveillance. He turned again, approaching the cay from the West, dropping the flaps to descend a further 100 ft. The cay’s thin white beach of powdery sand and small shells, quickly gave way to dense mangroves. At the last moment, Christopher spotted a slender radio tower directly ahead and swerved sharply away from it, pitching him and Avis sideways and causing the small taildragger to wobble.
“No way!” he exclaimed. “That is a very powerful antenna without beacons in the middle of the bush. Somebody is confident that nobody is going to fly over here.”
“It’s Mosquito Reggie,” said Mavis triumphantly.
“You do realise that Reginald Bowers has a lifelong complex because of that nick name,” said Christopher.”
He approached the cay again, this time gaining an oblique view by dipping the left wing; there was a break in the mangroves just beyond a dune. It was the old military airstrip, and parked at one end was a single propeller plane.
Aside from a few goats sitting in the shade of the dune, the runway was unobstructed. There was no air sock to gauge wind speed or direction, but the leaves of a solitary coconut tree wafted West, telling him that there was an Easterly breeze.  He landed neatly into the wind, causing the goats to scamper into the undergrowth.
Christopher parked next to the other plane and he and Avis disembarked on the hot, smelly island; notoriously home to large spiders, bush rats, toads, crocodiles and manatees; but mostly wild goats.
A wide footpath trailed the side of the dune and Christopher and Avis used it to advance further inland. They did not take Reggie by surprise because he spoke to them as they stalked through the dense bush.

“How lovely: Show off Kit, Sneaky Avis and Crazy Mosquito Reggie together again, except now you are trespassing on my island.”
His voice sounded from above.
“Share your ideas with the world Reggie. Blocking radio signals hurts innocent environmentalists, fishermen, meter readers and of course law enforcement.”
“The small price of scientific advancement.”
“Stop being a pest Reggie,” said Avis.
“The conversation is over Nancy Drew! You have found my secret laboratory; so you will never leave Great Goat Island.”
“Get to the plane,” Christopher said, grabbing Avis, “The cay is totally wired; maybe booby trapped.”
They raced down the trail to the runway only to see both parked planes fade and vanish in the steamy morning heat.
By Gwyneth Harold

Posted by Gwyneth Harold Davidson at 17:14