Mello go Roun 2013 - traditional but not stuck in time

All snapshots were taken by Gwyneth 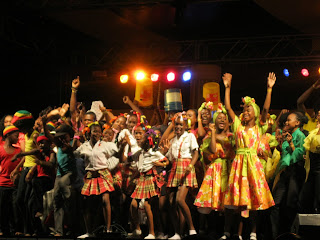 This is the marquee cultural event of the Jamaica Cultural Development Commission (JCDC), and as was expected, the evening out was great, and the show well executed. Nothing less is usually delivered by the JCDC. 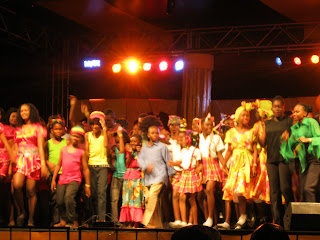 Where I was excited, was that the traditional pieces did not leave me with nostalgia, but had a freshness about them and I was left with the feeling that the practitioners of the traditional performing arts are moving the culture along, rather than precisely replicating the best of the past.

The show, which was held at the Ranny Williams Entertainment Centre, seemed to demonstrate that the speech writers, the musical arrangers and movement choreographers are updating the delivery of the performing arts.

I pause to recall that children's writer and publisher, Kellie Magnus, speaking boldly at a March 2013 Kingston Book Festival writers' event, said that many children book scripts today are being written about days of long ago in rural Jamaica. The comment was to emphasize that more contemporary writing is needed.

The selection of performances for the Mello go Roun 2013 staging absolves any accusation that the JCDC is looking backwards and encasing our arts in amber.

There were several comic dialects and storytelling, but none were written by Miss Lou! Much of the material was about matters that could only have happened in this epoch, the 21st century. 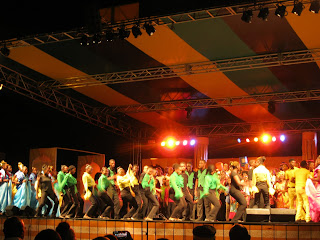 For example, Harrison Prep's Fi mi Fadda was about a group of world wise brothers speaking about their father, the Rastaman: who told them to tell their teacher that if they did not get above 80% in tests he would not be sending them back to that school; who dashed every pot out of the house when the mother cooked chicken; and who spent a good portion of his time a bun di chalice. We need nutrition Papa just a likke pork, was their persistent refrain.

Another speech item was about an old woman who insisted that her grandson Rayron prepare the yard for the arrival of the TV magazine show Hill and Gully Ride to their district. The formidable woman then directed the camera shoot and gave orders to the crew, such as telling them that it was time to stop shooting the cow and move on to the goats.

I guess since the culture has already given us the barber bwoy and the police bwoy, it was time for the pastor bwoy. One speech item featured a rude boy/shotta duppy being annoyed with the arrangements for his funeral and the guests in attendance.

The singers chose to perform folk and also reggae oldies, but the songs were set to original musical arrangements. A Cornwall College/Mt Alvernia duet to Yellow Yam was sung in a new way, and My Boy Lollipop was reinvented by a student from St Andrew High School. 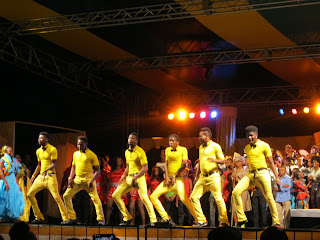 In the area of dance, Belmont Park Primary School in Greater Portmore displayed an acrobatic piece that raises my hopes that one day Jamaican gymnasts will participate in floor exercises and rhythmic gymnastics at a Summer Olympiad not too far in the future. Ardenne used Damian Marley's Exodus to tell their version of the ongoing struggle.

A memorable all-male dance crew went beyond gender boundaries by dancing female moves to the song Pretty Girl Kotch Fi Me. It was not the only song in their set, but that segment was a hit with the crowd.

Maypole dancing by William Knibb High School showed that the dance is slowly being tweaked by changes in the ribbon twisting patterns, and the movements of the pole holders.

The most memorable dance for the night however, might have been done by the Dinki Mini group which was unerringly interpreted by the young dancers. A lot more can be said about this sensuous dance, but they authentically brought their energy to the moves. 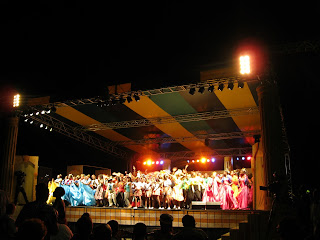 Laud Dance Ministry, Ardenne High School and Glenmuir High School did some elements of what I am loosely grouping as musical theatre. The dance by Laud Dance Ministry used movement and fabric to tell a story of how even when the devil's workers capture a soul, the power of God can revoke it and pull the sufferer through to salvation.

Closing the show, the Tivoli Dance Group brought joy and beauty on the stage with a wide skirt Caribbean theme piece. The dance was set to an instrumental version of a popular soca road march. The move to instrumental completely eliminates any issues with lyrics.

Mello go Roun is fortunately not the only outlet for these traditional performing arts. Several other national cultural events use these performances - but what is the next step? Many creative people have long called out for a mechanism that will take creative people from the amateur to the professional level. The proposed artiste management arm could effectively be that bridge.

Until that support comes, Mello go Roun and other JCDC variety shows will go on, and based on the crowd of a few thousand who turned out this Emancipation Day, there will be audiences who will be attending entertainment events like this for many more years to come. 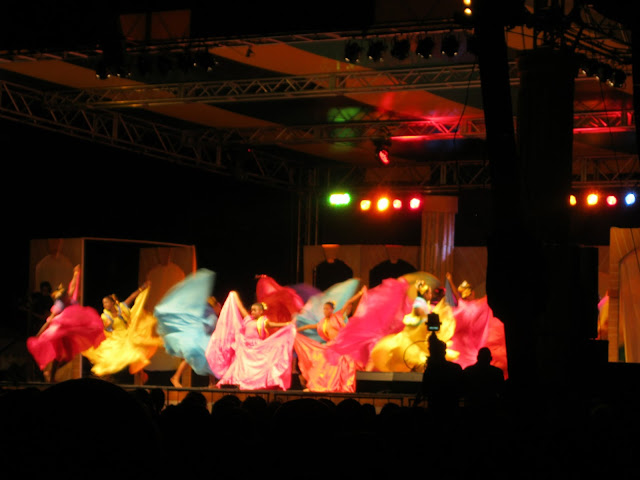 
Posted by Gwyneth Harold Davidson at 20:19

The UDC operated Turtle River Park is a nice place to stop in Ocho Rios. No cover charge, light snacks like chips on sale inside. There is a fee to park. These photos were taken in July 2013.

Link to Turtle River Park on the UDC attractons website


Posted by Gwyneth Harold Davidson at 18:03