Review - Tek Yuh Han Off A Mi!
I had geared up myself for a gruelling two hours to sit through a theatrical performance that focused on a difficult subject matter, that of the beating of a woman by her boyfriend, but found myself, along with the full house, laughing out loud right through. 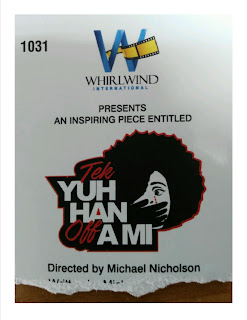 Playwright Michael Dawson used the tropes behind the personalities of the four characters to bring out humour that took the edge off the brutal purpose of the production, which was to expose the wrongs of beating up your girlfriend.
The well-meaning mother Audrey, played by Rosemary Murray, is clear in her philosophy about how women can get ahead in life and often quotes the bible, wrongly, such as when Moses was brought out of the den of lions. Audrey's role was largely responsible for taking the play out of the realm of misery to an easier place where the audience could be comfortable to face domestic violence without wanting to leave the venue, and Murray played the part lightly and brilliantly. I am sensitive that anyone who has endured and survived or witnessed abuse or of any kind may be uncomfortable of being reminded about his or her experiences, even in this way.
The boyfriend, Vincent Marzouca as played by Jean-Paul Menou, gave the audience plenty of reasons to kiss dem teet as they watched him easily slip from playing the dutiful son-in-law, to diligently seeking therapy for his long-standing problems, to declaring undying love with the woman he so terribly abuses. Menou had the most challenging role of the psychopath switching between loving beau and terrible tyrant from moment to moment. Job well done!
Karen Anderson, played by Shana Wilson is the abused young woman at the centre of the production. The interplay between her modern outlook and her mother's traditional views tickled the audience, greatly. Yet, the audience agreed that it was traditional values that have advanced Jamaica to where we are, and perhaps they should not be abandoned. Wilson's script carried the key messages that women and girls should all know so that they can stay away from, or lift themselves out of, domestic violence. They were heavy words that she delivered clearly and with conviction.
Tonisha (Toni), played by Brittany Bailey, is Karen's androgynous best friend, and the first person to break through the ironclad mother/daughter bond, to become Karen's confidante. Audrey is highly suspicious of the influence that Toni has over her daughter, and this interplay also amused the audience, which was also suspicious of Toni's motives. Toni changed the status quo within the pernicious family triangle, and Bailey was strong and spot-on for that job.
Theatre critic Michael Record, in his Gleaner review on January 27, said that he, and the audience, were unsatisfied at the end. I can understand why he said that, and add that it was probably the best ending for patrons who want an evening of enjoyment and not having to leave the theatre vexed and with tear-soaked eyes. Of course, the house relished the moment when it could cry out in unison with the victim "Tek yuh han offa mi!", which was the herald of the show. At the end, the audience gave Menou stingy applause as his reward for portraying the sickening abuser so well.
The audience reaction to the action onstage is an integral and fun part of the Jamaican theatre experience, and this night was no different. The hostess for the evening, Deon Silvera, was very welcoming and humorous. In addition, Rosie Murray had baked a sweet potato pudding that was raffled off for the price of adding your name and telephone number to a box. I had really hoped that I would have been the one.
The half-time show was a performance by smooth rapper, King Lopo, who is also Rosie's son. It was all fun.
I would say that the playwright succeeded in his message of denouncing the beating-up of women by lovers. I hope that this script becomes a small screen film so that audiences that desperately need this message get to see it and be inspired to do the right thing. This play would be a great benefit performance for a civic organisation, and I would say that it would be appropriate for children to attend in the company of their families so that conversations can begin, or continue. 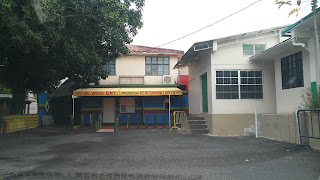 The Venue - Family-friendly Dancehall Culture ----------------------------------------------------------- I had never been to Green Gables so I cannot compare the former outlay with what is there now called the Jamaica Shopping Club Theatre. The space has an indoor playhouse seating 100, an outdoor playhouse seating 300, a bar featuring dancehall music, and no parking. The entire space is a family-friendly dancehall cultural experience where you can pay for all products using cash or plastic. The food was sold from a cookshop setup by a cook wearing a chef's outfit, complete with hat. There was a handcart man selling cold jelly coconut and also sugar cane and of course there is music and I did not sense any enjoyment of smoking. Persons were enjoying the outdoor space with their children.
The bar (not for children) is a remodelled step-up deep verandah of what was a 1930s - 1950s era Kingston family house, as can be found still in the Richmond Park area or even in the Golden Triangle.
I was intrigued by the graphic art of the bar ceiling, which is the Jamaican flag depicting the history of Jamaican music. Inside the bar is also a gift shop selling Kartel apparel. The servers were young women of various racial backgrounds dressed in sexy shorts uniforms. Under the watchful eyes of their mistress, they were alert and kept moving.
With no parking for patrons inside the yard, it was a spacious place for pedestrians to move about and feel safe. Parking is streetside and two men in safety vests offer directions, decently. A night out at at this location gives an authentic Kingston city experience.
There are actually three playhouses on Cargill Avenue. Jamaican Shopping Club at # 6, The Vibes Theatre (The Ashe Company) at #8 and another at #3 which was full at the same time.
END
I was not paid to write this review and I bought my theatre ticket, full price.

Posted by Gwyneth Harold Davidson at 12:06