The Jamaica Library service reading challenge is on, and here are the YA selections! Five authors from Jamaica and one from Barbados. Five novels and a memoir. 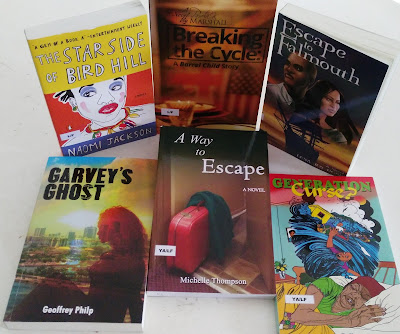 Book blurbs taken from websites promoting the books. Not written by me.
The Star Side Of Bird Hill by Naomi Jackson
This lyrical novel of community, betrayal, and love centers on an unforgettable matriarchal family in Barbados. Two sisters, ages ten and sixteen, are exiled from Brooklyn to Bird Hill in Barbados after their mother can no longer care for them. The young Phaedra and her older sister, Dionne, live for the summer of 1989 with their grandmother Hyacinth, a midwife and practitioner of the local spiritual practice of obeah.

Dionne spends the summer in search of love, testing her grandmother’s limits, and wanting to go home. Phaedra explores Bird Hill, where her family has lived for generations, accompanies her grandmother in her role as a midwife, and investigates their mother’s mysterious life.

This tautly paced coming-of-age story builds to a crisis when the father they barely know comes to Bird Hill to reclaim his daughters, and both Phaedra and Dionne must choose between the Brooklyn they once knew and loved or the Barbados of their family.

Naomi Jackson’s Barbados and her characters are singular, especially the wise Hyacinth and the heartbreaking young Phaedra, who is coming into her own as a young woman amid the tumult of her family.

Escape to Falmouth by Lena Joy Rose
When a feisty, Cherokee beauty and a strong-willed, male, runaway slave lock their destinies together in a headlong pursuit of freedom, they unleash forces that deny their liberty, threaten to destroy their love and propel them into dangerous exploits.

When Kathryn Bailey's teenaged daughter disappears from their home in Miami, the single Jamaican woman pursues every possible angle to find her. Kathryn's search leads her to a meeting with Jasmine's college professor, Jacob Virgo, a devout Garveyite and Rastafarian. Although their initial encounter is unpleasant, they must join forces to find Jasmine before it is too late. Through the teachings of Marcus Garvey, they learn to break down subtle barriers and find an unexpected bridge to new understandings and love.


A Way to Escape by Michelle Thompson
This is the story of the Tomlinson family's journey in Kingston, Jamaica, between the 1950s and 1970s. The Tomlinson family's dream becomes reality when they move from the inner city to a middle class neighbourhood in East Kingston. But their dream is short-lived. Arthur, the patriach and an alcoholic, in a drunken fury one night, orders his wife Rose to leave the house. Rose, a work-from-home dressmaker, leaves everything behind, and with her four children. the youngest still a toddler, flee to her mother, Mari, 'Granny'. The six of them share Granny's one-room quarters for months.


Rose finds work, and they move from one tenement yard to another, settling on a rented house for all of them. By this time, Arthur's life spirals as he becomes more dependent on white rum. He loses his job as a fireman, then the family home, and takes refuge in a room upstairs his favourite bar. Rose continues to seek a better life. On an invitation letter, she goes to Toronto, Canada. She remains there after attaining work as a live-in domestic, leaving the children with their grandmother. Granny's love, however, is not enough to restrain the teenagers. Marcy, the youngest, has a boyfriend, who is taking her down a path of drugs and staying out late. Will Rose ever return to save her children from a life of of waywardness? Or is the Tomlinson family destined to a doomed life?

Breaking the Cycle by Pamela K Marshall
Will and Sara traversed the obstacles of young love, further complicated by distance, parenthood and infidelity. They set aside the immature ideals and attitudes that led to strife and heartache throughout their teenage romance and have grown to learn that love takes conscious effort to endure. Now settled into a life together, old and new acquaintances threaten to wreck the happy home they have built. Misunderstandings construed as betrayals, mistakes with life-changing consequences and a tragedy that threatens to bring 'till death do us part' closer to home than ever imagined will either strengthen or shatter the bound Will and Sara have shared since they were children in Jamaica. Will and Sara must decide: when love starts to hurt, should it still be clung to, should it still hold two people together? Breaking The Cycle follows the couple's path to overcome the lingering effects of being barrel children as issues of abandonment and commitment continue to test their relationship. As they come to terms with their issues, can they still find happiness in each other's arms or will they find it best to part ways and let another mend their hearts?

Generation Curse? by Colleen Smith-Dennis
As the saying goes,'truth is sometimes stranger than fiction', but for the stoic matriarch, Mrs. Harmond,and her family, the events which characterize their lives do not come from a horror movie, but are a part of their daily reality. In the community they are seen as pariahs, as Mrs. Harmond's father had been accused of committing sacrilege by stealing the parson's bull and burning the manse. Everybody said they were cursed, from the grandparents to the youngest in the last generation, as the strange disappearances, uncontrollable juvenile behaviour and horrifying deaths rock the family like an earthquake of great magnitude and leave them cowering beneath a rubble of pain, disbelief and near hopelessness.
/END

Posted by Gwyneth Harold Davidson at 17:12

My experience at a recent event motivated me to compile a listing of  international Dancehall chart and crossover hits that showcase the very highest standards of the genre, and that is good for playing for general audiences.

Through my creative outlet, YA Readers Hangout, I have put together the Fresh Air Party Playlist that is created for use in a general public setting. It has a total of 27 international Jamaican Dancehall artistes on a track list of 35 songs across 23 original riddims and international collaborations covering more than two hours of high energy music that keeps the atmosphere lively and the dance floor moving.

The lyrics on the tracks mostly cover the theme of optimism and enjoyment of life with friends, with self-respect and romance as broader issues. They do not brood on violence or thoughts of self harm or intense heartache or otherwise linger on adult themes such as those that happen within intimate relationships.

It is my desire that disc jockeys display their passion for the music by also playing with a sense of occasion.


Posted by Gwyneth Harold Davidson at 15:52