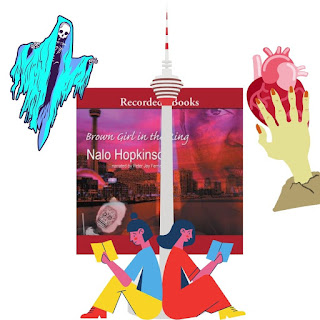 Nalo Hopkinson wonderfully delivered a dystopian world but left the door to hope open and in plain view of how to get through it.

Almost every Eastern Caribbean moko jumbie and some Haitian deities had a role in this fantasy that was also a family story with tensions between spouses and lovers, offspring and parents and also sits neatly into a Canada that is probably somewhat recognisable, but quite different. That is the job of fantasy, to take us somewhere far but the story still feels familiar.

The book rises to the place of literary fiction for me because of Hopkinson's technique and deftness with use of the language. We discover the motivations and personalities of the characters over the scope of the book not immediately. Her writing adeptly stays with the language of the main characters and it is separate from that of the English speaking storyteller.

We get a sense of a real community living in a futuristic Toronto, a community standing on its own resources. It has a history and also immanent concerns.

In addition to the role of spirits, which are all frightening in appearance and behaviour, the book meaningfully pulled in Caribbean ring games, folk songs and other cultural aural references.

The family side of the story has made me put this book firmly on the shelf about Jamaican books that address issues around the experiences of mothers and their parental output. Going by what our novel writers are putting out, this is a matter that calls for reckoning.

I would also add that this is a book that features leading female characters, the hero is a young woman and the central characters who support her are older women and then young girls. Even outside of their Canadian Caribbean world, the Canadian leaders are women.

A book for lovers of creepy, fantasy that pushes you to re-read passages so that you can enter and access that world. If you have knowledge of Caribbean culture, you will have a head start.

Which will make me add that the author used the name Ti-Jeanne for the central character, a name that has appeared in the masculine form in at least one other leading Caribbean literary work and also in Haitian Vodou.

I listened to this as an audio book from audiobooks.com. It was a dramatic reading which was well suited to this work as it contained lyrics from songs and stanzas from poetry. I hope that the author was happy with the work of narrator Peter Jay Fernandez. I thought that he delivered a very wonderful reading. he read the dialect with understanding and adeptly handled the supernatural action in the book.

Posted by Gwyneth Harold Davidson at 19:34