Ti-Jean Who? On watching a performance of Walcott's Ti-Jean and His Brothers 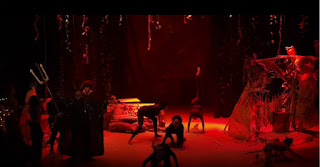 I am cheating here. I watched a performance of this play and did not read it.

This is a celebrated play from the Caribbean and it has all the flourishes of what I think can be called a play done in the classical Western European tradition. There are live musicians, singing and dancing, there are other worldly costumes, there is a Grecian style chorus, humans interact with animal and spiritual elements, there is poetry, there is humour, there are tears and scary bits, the characters speak in a variety of English accents but, there are no males acting as females.

I am spitefully adding that point as the performance that I watched as billed as the production of the Antigua Girls High School Drama Ensemble - Honey Bee Theatre, but the principal male characters are real boys, the girls were not given a chance! Then again, in a calmer moment I reason that it is perhaps it is a drama troupe that is sponsored by the school. Compliments to the performers and direction.

Many other sites will explore the reasons why this play is properly regarded as a literary gem, those were not my thoughts.

As a quick recap, a poor widow fearfully releases her sons, one by one, to the world to seek fortune and take themselves and family out of rural poverty, but first, they have to overcome the white faced devil. The book is layered with the West Indian experience of colonialism as experienced by peoples of African descent. Yes, the Caribbean is peopled with other races, but the spirits employed in the play are from African Caribbean mythology.

The matter that struck me most about this play is that it does not name, does not give show respect - to the spirit of the star character because, as I see it, Ti-Jean is Walcott's Ananse.

Where his stronger and more learned brothers failed, Ti-Jean succeeded because of his intelligence, his smarts, his befriending of woodland creatures and his analysis of the dangers and opportunities around him to survive and thrive.

In popular modern West Indian culture, Ananse has been relegated, like a once useful floor mop, to the dustbin. He has not come into modern times as a hero in a cape because he cannot. He is the weak, ragged, unremarkable in physique, character, but here, Walcott has elevated him to be the person who found a path out of a deprivation and death. Walcott writes life-giving qualities into the character of the quick witted, tricky, weak bodied character of Ti-Jean who left the web of his home and won where his talented brothers failed. Where the other brothers were boorish or serious and had a sense of self importance, T-Jean has humour and does not take himself seriously, even as he anxiously works through life threatening situations.

I actually think that Walcott had no intention to elevate Ananse, he did not integrate any obvious aspect of this character in his story, but ha! there he is, speaking and acting in the form of the young hero, Ti-Jean.

This is another Caribbean story of a young person creating new opportunities for himself under great obstacles, never losing a sense of fun, enjoying music and the environment and reverencing his loving mother and his God.

Again, a mother raising boys on her own and the family fails. (This is not me, this is Walcott). I have said it before that the Caribbean, especially Jamaican, novels talk about family life.

I am exploring a new thought; Caribbean music and poetry describe what is happening in society, Caribbean books are showing us new ways of improving and developing our society.

I have read a fair amount of Walcott and I do not think any of his great poems rise to anything more than an expression of what he has experienced or feels or has felt, his tender memories, his pitying for times gone by, opportunities missed, " with the leisure of a leaf falling in the forest, pale yellow spinning against green". In this play, through Ananse, he shows us opportunity.

This is not a footnote, but a closing. I really enjoyed the Honey Bee Theatre Performance, the young actors delivered in an enchanting way and Ti-Jean gave smiles. Loved the additional use of twinkling lights, it added to the enchantment of the location. The actress who performed Bolom was my favourite. I hope to read play one day.

Posted by Gwyneth Harold Davidson at 20:34